The Hargrave Tigers hit the pool last week for their first competition of 2023. Check out the recap below from Head Coach, Amanda Weishaar!

The first swim meet of 2023 happened Friday. Our opponents were: Virginia Epicospal School; Christian Heritage School; and Chatham Hall. With being back on campus for just a week it was going to be a good warm up swim meet and allow for the boys to shake out the cobwebs.

Bryce Adkins, ’23 (Gretna, VA) came in 1st overall! He is just outside his personal best and qualifying for State. But with an injury his time was impressive!

Victor Beilstein, ’26 (Cornelius, NC) came in 1st for his heat and 2nd overall for HMA! This was Victor’s first individual event outside of the relays!

Archie Hooper, ’25 (Wilmington, NC) came in 2nd for his heat and 3rd overall for HMA!

Nicholas Meyers, ’23 (Alexandria, VA) was swimming in his first swim meet! Nick did a great job and finished 4th for HMA!

Elijah Willette, ’25 (Chatham, VA) was just outside his PB!

Aidan White, ’23 (Danville, VA) dropped 5.74 seconds. This is especially impressive in such a short distance!

Dax Alexander, ’25 (Kalispell, MT) was just outside his PB!

Sebastian Medina, ’23 (Danville, VA) dropped a further 0.03 seconds from his PB and came in 1st overall!

Alex Vorontsov, ’27 (Indian Land, SC) volunteered to swim the dreaded 500! He looked exhausted at the end of it, but as the only male competitor, he came in 1st! True guts and determination. His 50 yard splits were fairly close together so he was able to maintain the pace almost the entire time! Super happy and super proud of his effort!

Unfortunately both of our relays DQ’d with one of the swimmer’s from each relay leaving the blocks early. Unfortunately they missed out on coming in 2nd and 3rd place.

Isaiah Walton, ’26 (Silver Spring, MD) was just outside his PB but he came in 3rd overall and 1st for HMA!

Charles Rausch, ’25 (Raleigh, NC) showed great courage in this event. Charles swam the 200 IM earlier and was unfortunately DQ’d on his backstroke. And now he had to swim another 100 of it! Not only did he swim it without a DQ, but he also came in 2nd for HMA and 4th overall! Awesome job.

Carson Pan, ’27 (Bellevue, WA) was swimming this competitively for the 1st time. He came in 5th overall and scored us some much needed points!

This event is very technical and you are either a natural or you are not! But I had 3 swimmer’s who wanted to try it for the first time. So, the challenge was set and they did great!

Nathaniel Duff, ’23 (Vernon Hill, VA) was fighting back and forth the entire way. Nathaniel had the final burst of speed and finished 3rd overall!

John Classen, ’25 (McLean); Isaac Wadsworth, ’27 (San Antonio, FL); and Archie Hooper, ’25 (Wilmington, NC) did themselves proud! They not only swam the entire thing without a DQ, but they finished with a smile on their faces! There is a lot of potential here, and it really showed how much it meant to them!

Overall, it was a good warm up meet with some great drops and some lessons to learn.

The next swim meet is at home on Tuesday January 17th starting at 4:00 pm. 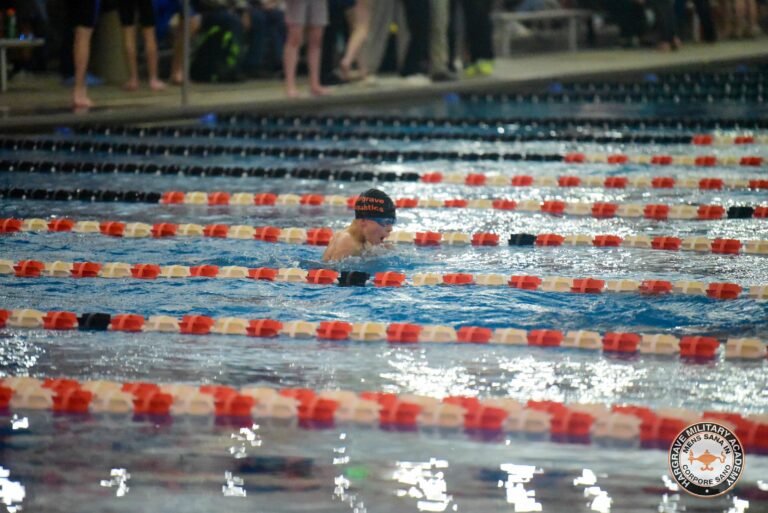