Despite an extensive trip that required the PG Basketball team to travel through 10 states and play 4 games in 5 days against stout competition, the Tigers were able to push their record to 24-0 before returning to the friendly confines of historic Walter Davis Gymnasium!

Hargrave found themselves coming off a three week holiday break with limited practice time to prepare for this stretch and the team had to find ways to grind out games together as they got their legs back under them. In the Hoophall Classic, Hargrave opened up with nationally-ranked, #4 Southern California Academy, in a battle of undefeated squads with both teams coming into the game sporting 20-0 records. Southern California Academy came out on fire and nailed eight first half three-pointers to build a 42-35 advantage at the break.

With a shade over 11 minutes remaining in the game, Hargrave found themselves trailing 56-41, their largest deficit of the season. Strong defense and some timely offensive contributions off the bench from Diovion Famakinde and Kam Roberts propelled the Tigers to a 21-3 run as they stormed back to take the lead, 62-59. Another Southern California Academy run pushed their advantage back to 68-64 but the Tigers made plays down the stretch by forcing turnovers and capitalizing on the offensive end. Sam Bradford came up with a crucial stop on Southern California Academy’s best player, forcing an extremely contested heave at the buzzer to try and tie the game that fell short allowing Hargrave to earn the 74-71 victory in a contest of undefeated teams!

Just 16 hours after their comeback victory over Southern California Academy, the Tigers had to play perennial NEPSAC AA power, St. Andrew’s School out of Rhode Island. Tired legs and missed opportunities contributed to the Tigers early 12 point deficit in the first half. After a well-timed timeout, Hargrave erupted for a 27-4 run to end the half up 33-20. The second half was nip and tuck with both teams trading blows but Hargrave was able to hold onto the lead throughout and moved to 22-0 with a 73-63 win over the Saints!

As part of the Durham MLK National Invitational, Hargrave matched up with Fork Union Military Academy for the second time this season as the latest instillation of this storied rivalry occurred inside famed Cameron Indoor Stadium. The Tigers again found themselves trailing into the second half but they were able to stay within striking distance and, by way of another impressive scoring run, were able to grow their advantage to double digits behind stellar defense and above the rim fast break finishes. A late flurry for the Tigers closed the door en route to the 84-66 victory! As a sign of great camaraderie, despite being fierce rivals on the court, Hargrave and Fork Union joined together in prayer for the Fork Union player who suffered a horrific injury during warm-ups. The mutual respect between both illustrious programs was on full display at center court!

Hargrave wrapped up this tough road swing in the Dean E. Smith Center (more commonly known as the Dean Dome) on the campus of the University of North Carolina for a matchup with UNC’s JV Basketball team. Tired legs and a tough shooting environment contributed to the Tigers trailing by 1, 30-29, at the half but a strong second half surge boosted the boys in orange to a 55-41 win as they continued their impressive streak to start the season! 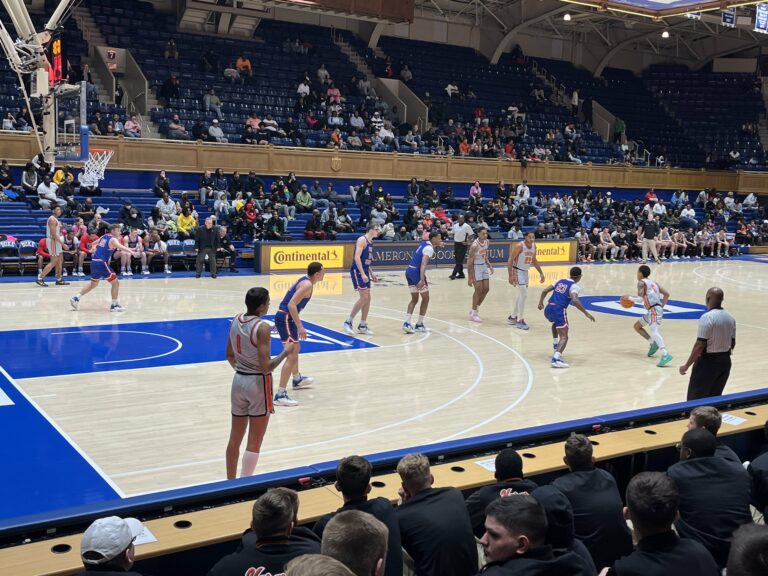